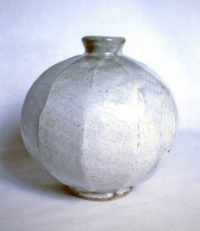 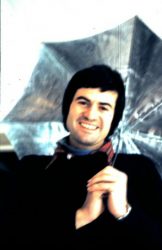 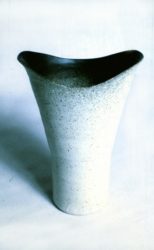 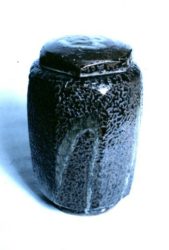 I started my pottery career at a small commercial South London pottery called Crest Ceramics, run by John Clarke. Before this I had tried a variety of jobs but wasn’t comfortable in any, within my first week at CC I knew I had found what I wanted to do. I learnt many of the basics; including, glazing, kiln packing, making from slip moulds, and making and applying silkscreen transfers. The pottery later merged with Geoffrey Maund pottery in Crystal Palace. Although I was learning many skills Geoffrey saw no reason to allow me to learn throwing on the wheel. So I enrolled for day classes at Sir John Cass school of Art Whitechapel for three days a week and focused on learning how to throw.

In 1967 I came to St Ives as I knew it to be the workplace of Bernard Leach. I was very fortunate after a few days, to get a spot at the Arch Pottery in the Digey as a piecework thrower. My two terms at the Cass was not adequate training for repeat throwing, but by necessity I rapidly upgraded my skills. The pottery was in grave financial trouble, at the end of the season it folded and I joined Troika Pottery. The partners Benny Siroto and Leslie Illesly were both very creative especially Lesley, their designs were very modern and of the period, and I enjoyed my time there, but my eyes were focused on the Leach Pottery. I had met Janet Leach and had approached her about the possibilities of me joining the Leach Pottery, but I had to wait.

In late 1968 Janet offered me a student apprentice post at the Leach pottery, where I believe my true training began. I had reasonable throwing skills due to my season at the Arch Pottery, but there was far more to learn. For the first time I met kilns that had real flames, and was able to make pots as a complete item, rather than just making one stage of the process. Under the tutelage of Bernard Leach and Bill Marshall I learnt an all-encompassing philosophy, about form, function, and aesthetics. For the first time I realised that pottery making was not just a craft but a complete art form.

After my two year apprenticeship I went to work in France for year under Jean Tessier at his atelier in Villenaux la Grand. After several months travelling Europe I returned to England and St Ives, where Janet asked me to join the Leach as a member of staff. I had now become experienced enough to be allowed to make and sell my own work in the pottery showroom. Although I had been working in pottery for about six years now, this was my first experience of thinking about, and making and developing my own style. I worked at the Leach for a further six years, during which time I was given three one-man shows – then in 1978 I departed for Japan.

I worked there for a year at the Ichino family pottery in Tachiqui, Tamba. It was a difficult but rewarding year, I learnt many new skills, and my stay ended with a sell-out solo show at the Hankyu Department store, Osaka. After several months travelling around Southeast Asia I returned to England. I was to go back to the Leach, but while I was away Bernard had died and circumstances had changed, so for the first time I knew I must go self employed and set up my own workshop.