The Earthenware pots, I call my illustrated pots, are mostly wheel thrown and shaped, although some of the larger pieces are slab built. They get several firings depending on the decoration, but the highest firing is to 1060c.

For decoration I use a unique technique that I developed, which is a fusion of the modern and archaic. After forming the pots they are burnished by rubbing the surface with a polished stone found on the beaches of St Ives, then covered with a fine sigilatta slip. This is one of the oldest techniques known for waterproofing and finishing before the use of glazes. I then apply a light sensitive emulsion that I have developed for using on unfired clay. I apply a wash of ceramic pigment to the pot, after which I expose my design by projecting it from a computer. After exposure  the unexposed areas are washed off, leaving a single colour image, I sometimes intervene with markings and engravings at this point. The pot is then bisque fired after which more colour pigment can be applied, it is then fired once or twice more depending on the pigments used.

I use a large drawing tablet to form my designs, sometimes drawing on the image of the pot I am working on. I also makes use of digital patterning techniques for patterns that form repetitions and other tools with which I can distort and manipulate the image. Finally a beeswax polish is applied to give a sheen and to protect the surface of the pot.

These are formed from a white clay with special properties of high thermal shock resistance.

After an initial biscuit firing, the pots are glazed with a glaze which contains a very high copper oxide content; to a temperature of 1080°c . They are then fired again in a raku firing, where the pot is taken red hot and the copper reduced in a mixture of paper and sawdust. After cooling patinating chemicals are applied using various techniques giving a variety of colours and effects.

As the chemicals are destructive by nature this process has the effect of  completing the circle of construction and destruction. Although I stop the destructive process by applying some strong acetic acid and applying beeswax as a protective coating. 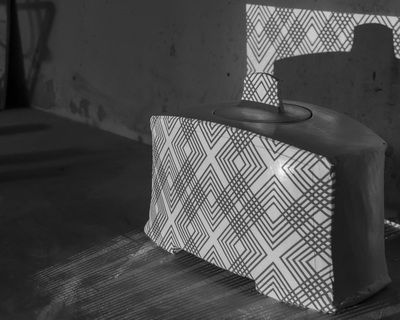 Projecting and exposing my design on to the pot 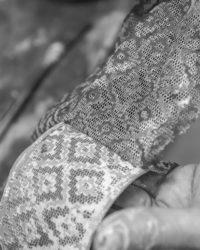 Sometimes I use fabric stencils that I make from my designs 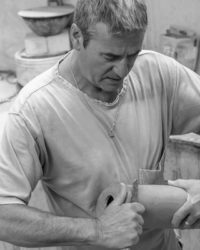 Forming and shaping the pot