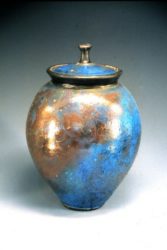 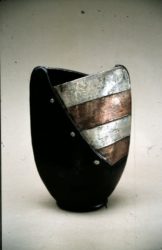 Vase with studs and stripes 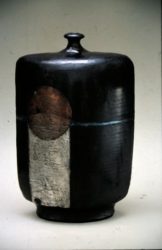 Tall bowl with studs and stripes 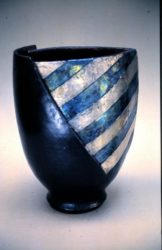 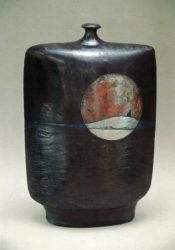 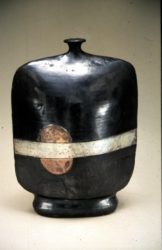 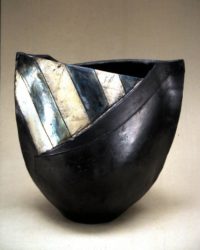 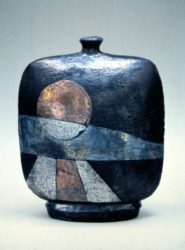 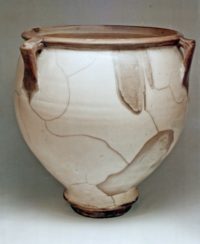 Large pot with side handles 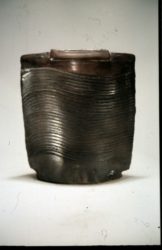 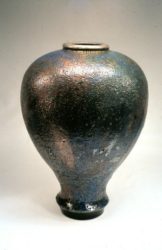 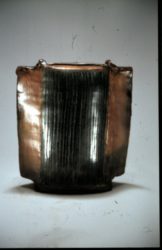 Opening my workshop and surviving

I returned from Japan and my travels in 1980. When I left Japan its economy was booming, but on my return I found Britain in recession. Not the best time to open my first studio workshop, but ignoring all reason, I started up in Cross St. Penzance in some redundant council office buildings. I called the pottery Cross Pottery, and started by making a range of tableware. I built a kiln from bricks and at that time state-of-the-art ceramic fibre. The recession had hit Stoke potteries very hard, and in search of new markets they were making cheap lookalike handmade pottery. When I tried to sell my first kiln load, I found that shops were already stocked, and my wares looked expensive in comparison. I finally found an outlet, but had to sell at a heavily discounted price.

This was to be the pattern for a good part of the 80s, many local Potters went out of business, and I realised I needed a new plan. I decided to focus on individual pots and sell to galleries, but I needed a style. Whilst in Japan I had been impressed by the lacquer work, the black silver and gold pattern work must have stayed in my subconscious, and it inspired range of pots was to be the backbone of my work in the 80s.

I wanted to move away from the traditional reduced stoneware of my training, and explore other methods and glazes. So I started experimenting with silver nitrate and copper glazes, and firing them in a raku firing. The terra sigilatta slips on the body gave a silky rich black finish in the raku  firing and the silver nitrate and copper formed into its reduced metallic state. Unfortunately the raku firings meant I needed to move out of Penzance, so I rented a barn in farm buildings midway between Penzance and St Ives.

I worked here for a further seven years exploring many aspects of raku and smoked firing. I enjoyed the immediacy, and the inter-reaction with firing each piece individually, rather than the cycle of firing a large batch of pots. The kiln became a tool, an extension of the wheel, and the paint brush. I had developed various gallery outlets for my work, and enjoyed the rural  peacefulness, but I was feeling out of touch, and lacking communication, I missed an environment of working with other potters and craftsmen. I began looking for a new workshop with an opportunity to set up a showroom and sell direct; I also wanted to work back in St Ives.